5 Theatre Reviews ⁠of The Oregon Shakespeare Festival
Downtown Luxury Apartments in Florence, Italy
Your Guide To The Safest Sunscreens. Toss Those...
When Tim Ferriss Asked Me What Podcasts I...
How To Be An Influencer? What Not To...
How To Be Productive And Win — Eat...
Where To Stay In Florence — A Renovated...
ItalyTravel

Coffee With Clet, An Intimate Interview With French Street Artist 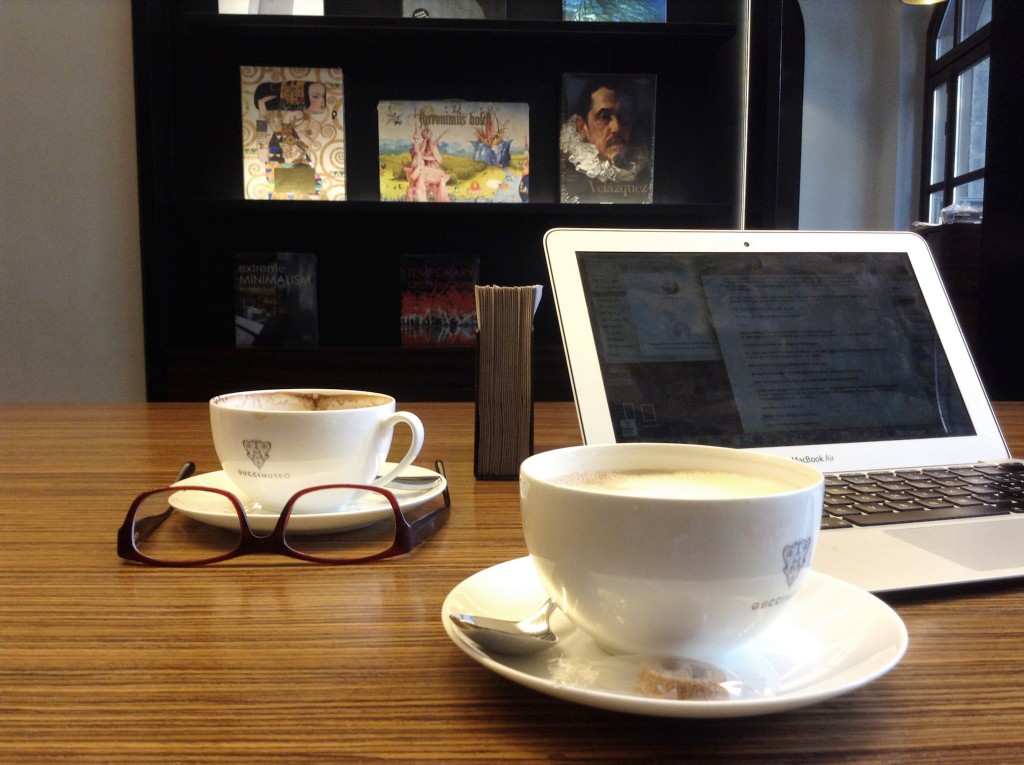 What’s a horrible way to start off an interview with an artist you admire? By showing up 30 minutes late and blaming it on a strike. Yes, there was a strike in Florence, so the bus schedule was all wonky and as I hopped off the first bus I soon realized that the second bus would never arrive.

On foot, I sped towards Piazza del Duomo, Skyping Clet on my iPad mini since I have no cell. “Ciao Clet, sorry there’s a strike so I’m running late!”

“Perfect, see you at Gucci!”

Gucci, as in the Gucci Caffè which is connected to the Gucci Museum in the back of Piazza della Signoria. I sat down at the long communal table in the back and ordered an orzo cappuccino. Clet soon joined me wearing, as always, a pin on his jacket with one of his famous street sign pieces.

I first met Clet at Il Santino after organzing my first instameet in Florence and then again in Elba, so I was excited for one-on-one. Besides asking him about his street sign art that’s all over Europe and now New York, I was interested in the man, not just the artist. 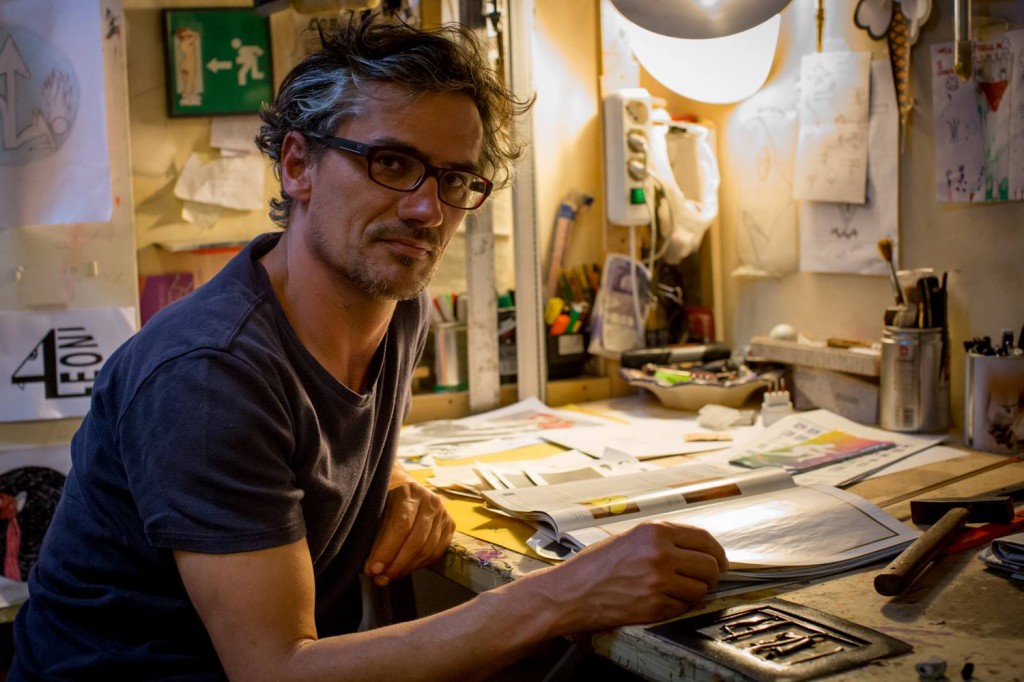 ©Clet in his Florence studio

Born in Brittany, France, Clet Abraham aspired to experience life outside of his home country. He studied art— all types from drawing, painting to sculptures and when a restoration job in Rome recruited him, he was ready to make his move to Italy.

Yes, Clet’s first job was as a freelance furniture restorer twenty years ago. He was committed to the trade, “I work well with my hands” he mentioned, for three years then he pursued a bit more of a traditional artist’s life. He had a studio where he sold many types of his work anywhere from architecture design to portraits.

The reason he became an international name is due to his clever street sign pieces. It began four and a half years ago. For fun, he began to deconstruct street signs on a drawing pad. “It was like a joke”, he said as he explained that the intention to mess with these street symbols was merely to challenge himself and figure out how he can alter them, kind of like creating a puzzle by using symbols to speak to one another.

Drawing is the basis of art, “it’s a language”, so he began to draw a new language using symbols and silhouettes to challenge what the law represents. His street art is not intended to disturb the legal meaning of the sign, but to enhance it. These signs live between a world of art and barriers, so at what point does a sticker become illegal?

Seriously, think about that for a second. What Clet is doing is applying interesting, not everyday images on daily symbols that people actually have to study in order to pass their driving exam. These signs represent the law, which keep us safe yet at the same time Clet is pushing the envelope by expressing that the law can also hinder us—stopping society from growing and improving. 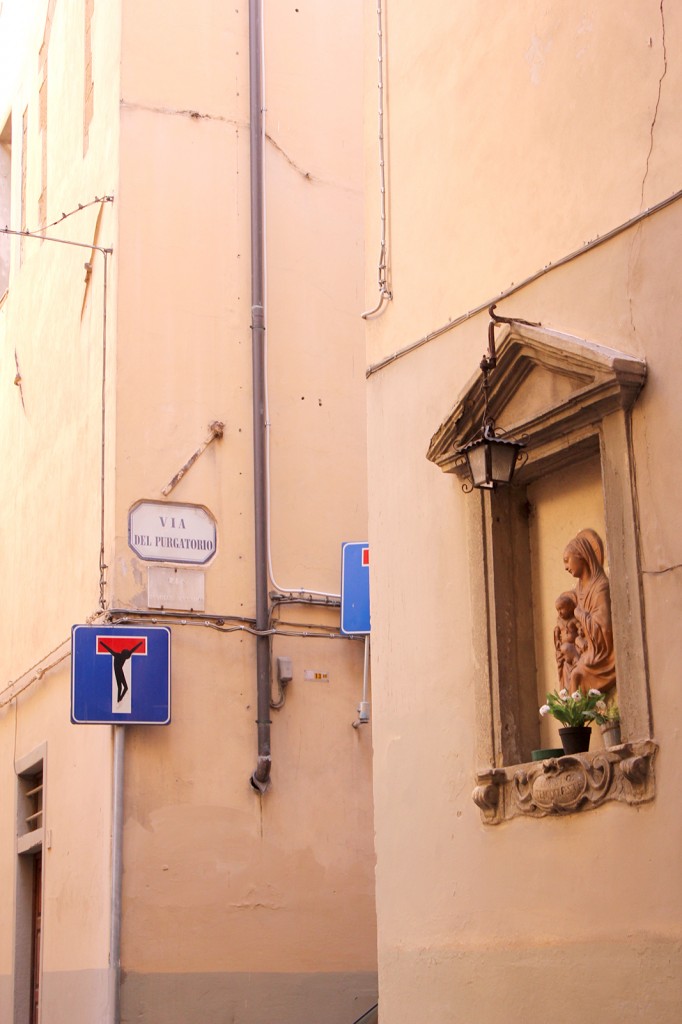 His first design from years ago, Christ

Clet’s a man who doesn’t pay attention to what people think of him. He cares more about his art and that the common man can be positively affected by the work that he does.

My art is not about disrespecting the public… it’s about speaking with the people, so I need to pay attention to the people. There’s a language for everyone and if they don’t understand my work then the work may not be as clear as it should be.

He sees his job as sharing this push and pull feeling with the law and in turn with society. How do we let the law affect our thoughts and decisions? I’m not saying to break the law, but isn’t it healthy to question things and to test boundaries to see where we stand in society and within ourselves? 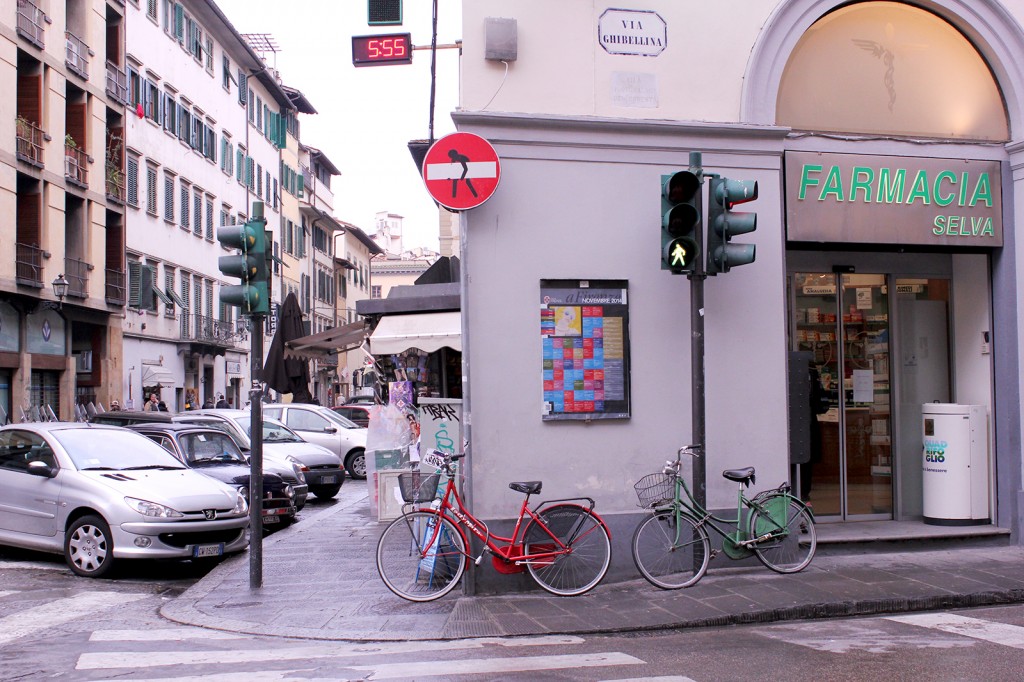 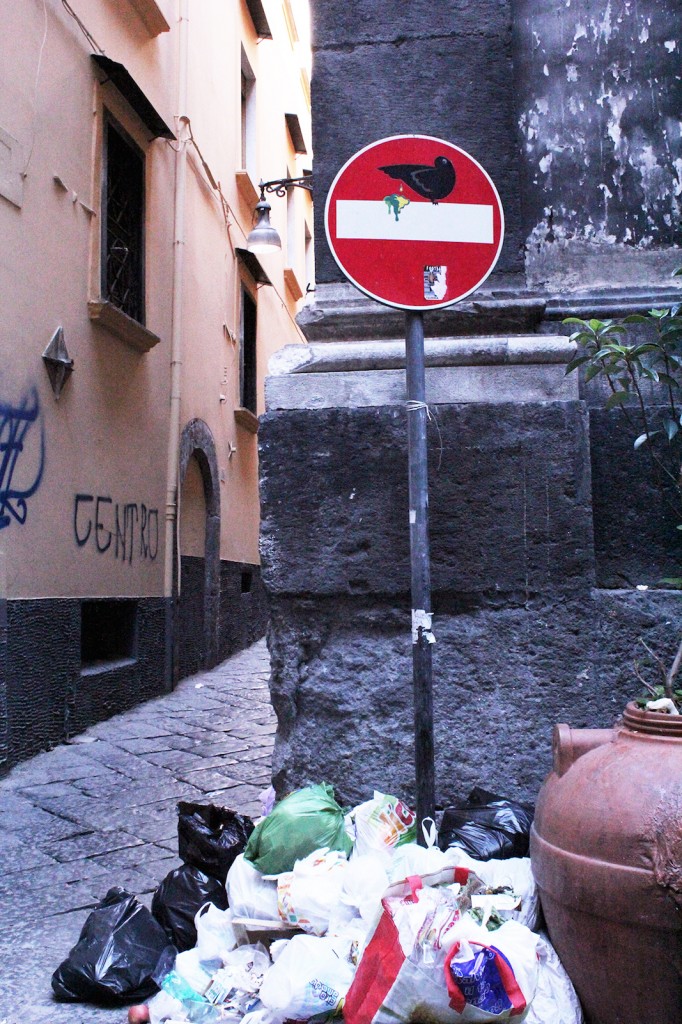 I asked Clet what upsets him the most, what misconceptions people may have of him. His concern is…

when people don’t understand the art…some people think I don’t respect public space, that I do this to sell street signs. The message is about how respect for the law can be an obstacle for society…sometimes the law controls too much. Society can be hindered.

His first street sign piece over four years ago was the crucified Christ, the same image he was wearing on his coat as he sipped his Gucci cappuccino. There are over 100 images in total and his favorite one is always “the last one I created.” Clever answer Clet!

“So, do people call you to buy your signs?” I asked. He’s hard to get on the phone as you won’t find his number anywhere online.

The world is getting smaller thanks to social media and Clet’s Facebook page is actually the best way to see all of his work. He sells the street signs anywhere from 600€ to 5,000€. He doesn’t work with galleries because he prefers to sell his pieces at a certain price and then have the stores or art dealers do what they may with the signs. Currently, you can buy his signs (and other products like stickers, shirts, magnets and prints) from his studio on via Via Dell’Olmo 8r.

As much as he enjoys working on pieces dedicated to the home, he prefers to see his art on the street. “I like people to have a surprise when they turn a corner.”

As you may guess, Clet has had his run-ins with the law. “You’ve been arrested many times, right?”

He started to smile and said, “Yes, I have a funny story about an arrest in London.”

It was 4am and he was a bit tipsy rolling down the city on two wheels with a bag of stickers ready for the perfect signs. He wanted to test the limits of the London cops, so he biked slowly and didn’t rush the process to see who and when someone would take notice. Soon flashing lights were in his face and the sirens were sounding.

Clet kept his calm and pulled out his phone to show the Captain his work on Facebook. The Captain seemed cool and asked Clet to remove the sticker. “No, that’s not my job,” Clet responded. The Captain made an officer remove it and let Clet off with a warning.

Before he knew it, Clet was a free man back on his bike peddling faster this time. He heard someone on a bicycle trailing behind him. It was a cop who was sent to follow Clet and make sure he stops putting stickers up. Hopefully, those stickers are still up in London somewhere.

Besides arrests, he has quite a list of fines that he refuses to pay. Paying the fines would represent his acknowledgement that he is in the wrong, so would rather reap any repercussions. So far, his fines are 56€ in Florence for putting up a sticker, 5,000€ for “contamination/littering” in Pistoia which was reduced to 500€, one for a sculpture he installed on top of a speedometer, a fine for the Common Man sculpture on Ponte alla Grazie and an art piece on via San Giorgio. I just hope he has a great attorney. 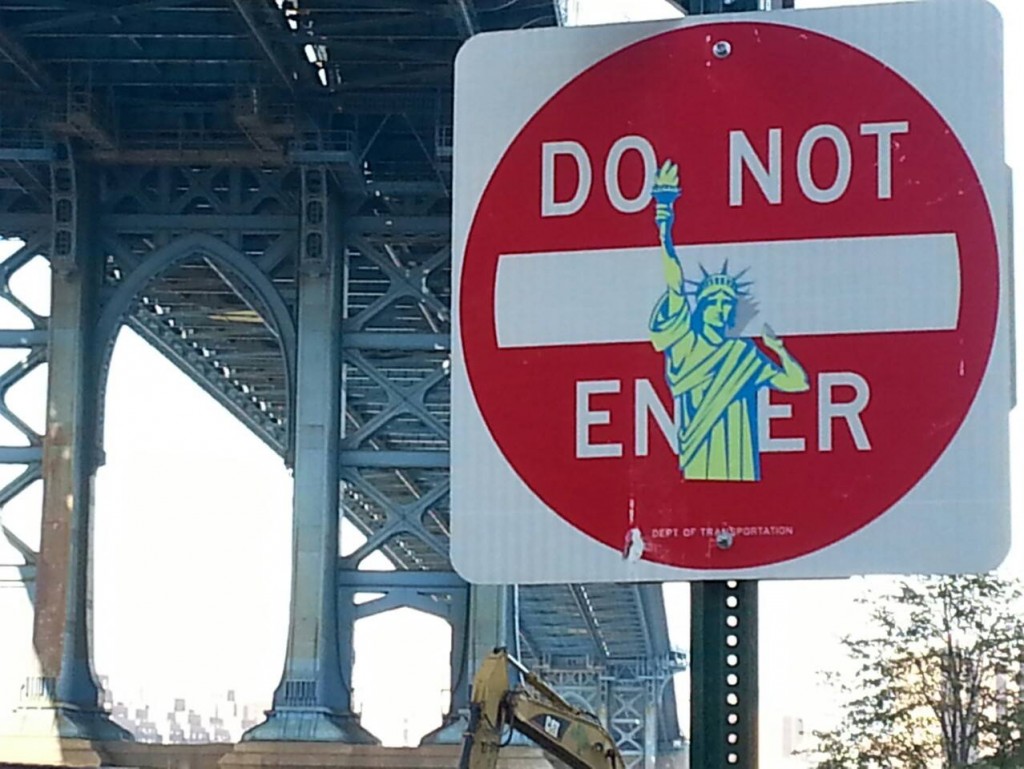 As for traveling, Clet was recently in New York for some inspiration and to put some stickers up on signs—stickers made just for New York. This past holiday Clet was in Japan, so I look forward to seeing what type of signs he made for that trip.

The friendly Frenchman has many projects in the works; an interesting one is commissioned by the mayor of Dicomano, Tuscany this March. In the past, City Hall in Paris hired him to share his work with local middle schoolers. It’s fascinating that this man who enjoys pushing boundaries of our legal confinements is getting jobs from government agencies. Perhaps Clet will change laws regarding street art? Or will restrictions remain to try and contain people from expanding their creative space?

I am a travel blogger after all, so I had to ask his favorite spots in Florence. “I come here to Gucci a lot and Volume has fun concerts during winter. There’s a great Chinese restaurant called Shanghai on Via Sant’Antonio where my Chinese friend and I go…authentic and sometimes the menu is only in Chinese.”

“Any last words, Clet?” I was wondering if he had words of wisdom or something deep.

“Sei simpatica,” he says with a smile, which translates to “you’re sweet.” Clet, you’re quite a charmer!

Are you a Clet fan too, which piece is your favorite?

The Best Wine Tasting in Florence

Driving in Tuscany: Medieval Towns and The...

You Know You Live in Jackson Hole...

How the Alps kicked my butt

Top 6 Places To Visit in Tuscany...

Why You Should Visit Naples And Its...

Top 10 ‘fall’ pictures of the week

The Secrets to Cost Effective Travel for...

Vinitaly Verona, a smörgåsbord of wine

I just wrote about Clet’s street art in Florence and NY haha! I love his work and it’s cool that you got to sit down and interview him ~~ Someone just asked me if he sells his signs, and now I have a response to give them 😀

Ya, he is such a cool guy. It’s fun to bump into him around Florence and especially grateful that he took time to sit down with me for a one-on-one. I loved your post, love the sticker giveaway!

[…] Clet is a famous French street artist based in Florence. Read about his arrests, see his work and know the man behind the street signs!  […]

Love intriguing street art like this! What an interesting guy and great interview!

Interesting ideas, indeed 🙂
One thing I adore doing whenever I’m traveling is to hunt for various forms of street art.

Ya, and he’s a great one to hunt down!

Interesting interview with Clet! Fun to know some more about him! Nice blog!! I just moved to Florence so I will def read yours for tip and inspiration 🙂

Thanks Malin! I loved the opportunity to sit down with him and ask him all that I’ve every wanted to know…some questions/answers were left out 🙂

[…] working with opposing forces and humor, and what seems to be a gentle soul. Don’t miss this exclusive interview with Clet! I interviewed him a while back at the Gucci Cafe in Florence and it’s my favorite writing […]